The Better Health Channel, a public service fully funded by the Victorian government, summarizes years of research finding to conclude that hypnosis may be effective in treating a long list of disorders: 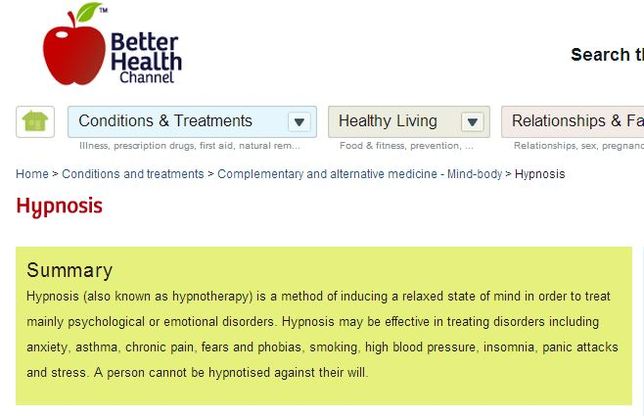 They go on to say:

"Today, hypnosis is recognised by the scientific community as an effective healing tool".


For a detailed summary of the research on the effectiveness of hypnotherapy in addressing a wide range range of psychological and medical issues click here.

Hypnosis as an Adjunct to Cognitive-Behavioral Psychotherapy:
A Meta-Analysis
Irving Kirsch, Guy Montgomery, and Guy Sapirstein
University of Connecticut
Abstract:
A meta-analysis was performed on 18 studies in which a cognitive-behavioral therapy was compared with the same therapy supplemented by hypnosis. The results indicated that the addition of hypnosis substantially enhanced treatment outcome, so that the average client receiving cognitive-behavioral hypnotherapy showed greater improvement than at least 70% of clients receiving nonhypnotic treatment.

Effects seemed particularly pronounced for treatments of obesity, especially at long-term follow-up, indicating that unlike those in nonhypnotic treatment, clients to whom hypnotic inductions had been administered continued to lose weight after treatment ended. These results were particularly striking because of the few procedural differences between the hypnotic and nonhypnotic
treatments.

This is one technology I use with some hypnotherapy clients to assist in establishing deeper hypnotic/meditative states. Sound patterns have been shown to influence brain waves and thereby influence states of consciousness.

Hemi-Sync is a trademarked brand name for a patented process used to create audio patterns containing binaural beats, which are commercialized in the form of audio CDs. Interstate Industries Inc., created by Hemi-Sync founder Robert Monroe, is the owner of the Hemi-Sync technology.

Hemi-Sync is short for Hemispheric Synchronization, also known as brainwave synchronization. Monroe indicated that the technique synchronizes the two hemispheres of one's brain, thereby creating a 'frequency-following response' designed to evoke certain effects. Hemi-Sync has been used for many purposes, including relaxation and sleep induction, learning and memory aids, helping those with physical and mental difficulties, and reaching altered states of consciousness through the use of sound.